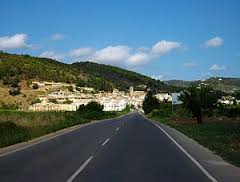 This walk starts  and ends in the town of Llíber . The length is just over 7.7 miles and because there is a stretch of steep climbing,  this is a hike of moderate difficulty. The walk passes over asphalt roads, forest paths, mountainbike trails, and rocky areas. Hiking Valencia; The hike starts from the Plaza Mayor in Llíber where the town hall is located  a  9 mile drive from Refugio Marnes, the car can be parked anywhere near the main square. We start heading north along  the alley taking the steps that lead upwards.  Then there follows a rising path to the left and at the end of this a right turn is taken. Then right again and after just over 100 yards turn left up a mountain trail . Then turn to the right again,  this is a path through agricultural land, a so called  ‘terrace’. This path is followed for  about 0.6 miles, until a wider path emerges, a right turn is then taken. This direction is followed for about 0.35 miles then  the CV-748 (the road between Llíber and Gata de Gorgos) is crossed.

Hiking Valencia a great idea for an active holiday in Spain!

Hiking Valencia; The route continues on the other side and this is a paved road through the suburbs with detached houses. This road goes up gradually and  after about 1.85 miles  a right is taken onto a gravel path just after the house ‘La Alqueria de Piedra ´ has been passed. Turn right again after about  100 yards onto a small descending path. Continue on  this path to the left  and this ultimately leads along a narrow forest path between the pine trees – this route is also used by mountainbikers. In this walk this section has already been described, but from the other side. After about 0.6 miles the forest is left behind us and the route crosses the CV-748 again. On the other side of the CV-748 the paved path is followed. This path runs through the Barranco de la Fondacha and  goes up gradually for about 1,85 miles. From here start the steepest stretch of this hike, this section is about 0.6 miles long but the elevation is 820 feet.

Hiking Valencia; Once arrived at the top one must cross under some rock formations.   Continue left and here the descent of this hill starts. Follow the path for about 1.5 miles and in the valley the riverbed of the Rio de Gorgos is crossed again. Follow the direction of the riverbed on the other side and take the  path that runs beside  a number of houses –  this is the direction of Llíber. Along Calle de San Vicente the central square of Llíber is eventually reached. Keep an eye on the map or on the GPS in the last part of this walk (from the descent of the mountain onwards) to see which is  the direction of the walk.

Here is the map of WikiLoc. Lots of fun with this walk,