Walking Valencia; This varied walk leads through a wooded area along field, over asphalt, through the pretty village of Jesús Pobre and the mills above the town are also visited. The trail is just over 5,5 miles long and takes about 2.5 hours. Apart from the climb to the mills it is an easy hike. From Refugio Marnes it is a 50 minutes drive to the starting point of this walk, here. With the car we turn off at kilometer 6 of the CV-735, this is the district of Los Lagos. Head left at the entrance of the urbanization and park on the left side of the road. On reaching the rubbish bins the walk starts on the left side of the road, a forest path is taken, indicated by a red / orange arrow (see picture). 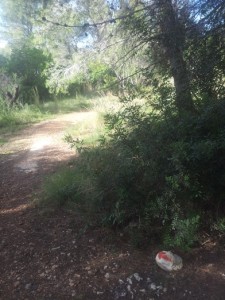 This path will run until an asphalt road is crossed and the house “Finca La Pergola” appears, here a right turn is taken. This road is continued to the end, (a dead end), here is the entrance gate as seen in the photo. The forest path on the left of the picture is taken and continues alongside the yard of a house. 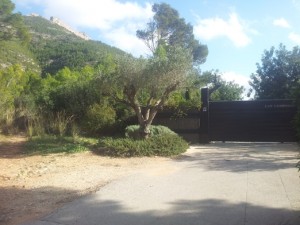 This path is followed until the end where a barrier appears, go straight here and follow this path.

Walking Valencia; On the left there are neglected fields now overgrown by ‘Pinos’ (pines ), the stone walls are still visible.

This entire area was full of vineyards for the production of raisins in the 1920s. Because the plants were affected by the fungus Filoloxera the entire valley was burned to prevent further infestation s. Thereafter, the quality of the fields  never recovered and the area was abandoned. The raisin production moved to Turkey.

Walking Valencia, a hiking holiday in this area is a great idea the whole year trough

This path ends at the main road (CV-735) and this is crossed. The road  opposite is then taken. At a beautiful stately house, turn left and  at the next T-junction,  turn right. After about 760 yards a curve appears and here a left turn is taken onto a dirt path  – a pole with a white / red stripe  indicates this path. This dirt road is followed up to the first houses of the village of Jesus Pobre. Walk up to the main asphalt road, go a little left and cross over at the first zebra crossing. Walk down the Carrer Pare Pere street, a beautiful street with colourful houses and painted flowers on the road (see photo). 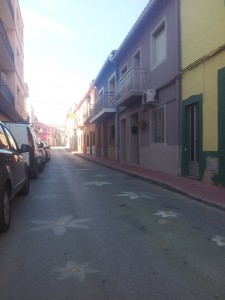 Walking Valencia; The name of this village, “Poor Jesus’, originates from Pare Pere, a devoted father. He was caring for the poor, sick and oppressed and suggested that the simplicity of Jesus’ life was an inspiration to the world. For this reason the Christian population has given the village its current name.

At a deep pink coloured house on the ‘Plaça del Poble’ a sharp left is taken onto the Carrer Diagonal in.  The Carrer Les Eres ultimately leads to the Plaça de l’Església and the church itself. The walk continues on the left on a concrete path. A well is passed at a given moment. At the next T-junction a right turn is taken, here begins the climb to the ancient mills (photo).

At one point gives this wooden sign shows the correct direction. At the top beautiful views can be enjoyed!

Walking Valencia; Take the same path back down to  where a right turn is taken  at the T-junction. At the sign ‘Casa Antigua Canina’ we go left alongside an old, small cemetery. The asphalt road is crossed and the path is continued on the other side. This path is followed for about 0.85 miles and then  at the T-junction we turn left. Note: There is already a kind of crossroads before  this but that is more a left turn and a straight route (the Wikiloc map shows that a left turn was taken but this was incorrect). So go straight until there really is a clear ’T junction.  After that at the next T-junction we turn right, this is the road past the house which we took at the beginning. Cross at some point again the CV-735 (main road) and take a forest path to the left which is a little bit tucked away, just over 100 yards from the CV-735. This short stretch ends up at a house with the name ´Lougheed´. Here right and immediately left, this road crosses the urbanization and leads back  to the parked cars.

Walking Valencia; Here is the map of this walk on WikiLoc.

Enjoy this walk at the Costa Blanca!