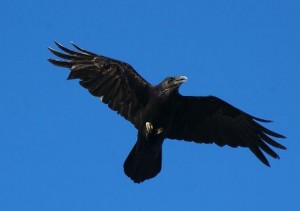 Raven (Corvus corax) on of the Bird Species of Spain

Bird Species Spain; The raven size 25,5 inches – 47 inches wingspan  is the largest songbird of Europe, this seems surprising at first sight, because a raven is not directly the kind of songbird you think of at first. Ravens are classified as such because of the diversity of sounds that they produce. The most famous sound can be found here. When ravens are in flight this sound can be heard and it is believed that this is a call to indicate its presence to other species. The Raven can be confused with a black crow, but is much larger (the difference is about 6.3 inches). In addition, the wedge-shaped tail of the raven is clearly visible in flight, crows have a more rectangular tail.

Bird species Spain, found out about them on your birding break in Spain

Ravens are omnivorous; they eat carrion, seeds and fruits, insects, but also small mammals. They hunt prey up to the size of rabbits. In the breeding season they also prey on chicks of other birds. They are often seen in pairs (a pair of ravens often remain together for life), and they hunt together when they attack a nest, one of the two birds is chased away by the breeding bird when the second raven plunders the nest. They are also often found in large groups on garbage dumps or gathering alongside roads in the mornings looking for animals that have been killed by traffic. These examples show that ravens can easily adapt to their environment and are therefore to be found in a variety of habitats.

Bird species Spain; Ravens are found in dense forests, on coastal cliffs, on farmland and in mountainous area. They build their nests in tall trees or in rock cavities. The fact that ravens are intelligent birds is evident and is scientifically supported as well, in these books are dedicated to this topic: author Bernd Heinrich; Mind of the Raven and Ravens in Winter and the books of author John Marzluff; In the Company of Crows and Ravens and Dog Days, Raven Nights. Not scientific but fun is this video of a little experiment with a raven. In this video you can see and read more about the common Raven In the yard of Refugio Marnes often couples of ravens can be seen, making their tipical commonly heard gurgling croak when flying over.