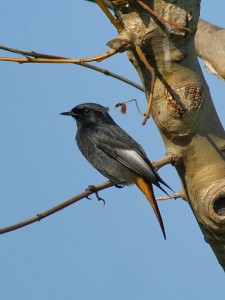 The black redstart- size 5,5 inches is probably the most commonly observed species in and around the yard of Refugio Marnes and therefore it can not be missed on this bird page. The male and female differ in the color of their plumage. The male is generally gray in color, but has a black throat and chest that varies in size from one individual to another. In addition, the male has a white spot on the top of the wings. The female lacks the white spot and black throat / chest area, but the red tail is present in both sexes.

Birding Alicante Spain; The species is often good to see because they sing from high perches at the top of a bush or  on top of houses (chimneys) and on top of rocks for example. An interesting fact about this species is that in Southern Europe they are mostly bound to hilly and mountainous terrain, in central Europe, the species, however, has adapted to life in cities and towns. Here, houses and buildings are replacements for the rocks and mountains in their natural habitat. Black redstarts thrive in a dry and sunny climate and are observed from sea level to altitudes above 1.80 miles. Their diet consists mainly of insects they chase along walls, they also eat (to a lesser extent) seeds and berries. They build their nests in crevices and cavities in buildings or rocks. In the Iberian Peninsula the bird is present throughout the year. Birding Alicante Spain a good idea for a birding break abroad