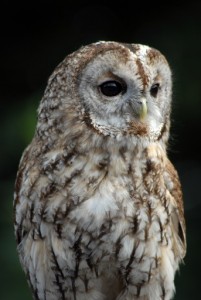 The typical, beautiful sound reminiscent of a horror movie produced at night by the tawny owl  – size 15 inches – wingspan 37 – 41 inches, can be heard around Refugio Marnes. The tawny owl is as big as a crow, and its appearance is characterized by a general round shape. The colour of the plumage is predominantly dark brown, but the shades of individual birds vary from brown to reddish brown. Because of this colour tawny owls are very well camouflaged, because their plumage resembles the colour of a tree trunk. Furthermore, the eyes of the species are completely black and the bottom of the birds is of a lighter colour than the top parts. The wings can, for example, in the lights of a vehicle, give an almost white appearance, which can cause confusion with the barn owl. Because this species is only active at night, the tawny owl is visually difficult to detect. Occasionally small birds such as songbirds betray the presence of a tawny owl because of their alarm calls. However, if this happens it is still very difficult to find the bird because of its camouflage.

Birding Spain; Tawny owls feed mainly on small rodents such as mice and rats. In addition, they also prey on amphibians, insects, and birds for example when given the chance. This species easily adapts to its environment with regard to its choice of food in a particular season. An interesting fact is that tawny owls are very sedentary, for example when a young fledges, they often find their own habitat within a radius of 12,5 miles from the nest where they were born. Deciduous forests are a habitat preferred by this species, but tawny owls are also found in open terrain with scattered shrubs, as long as there are some old trees in which they can breed. The distinctive call can be heard here, it is produced by the male. Because owls can not turn their eyes of owls they have a very flexible neck, so they can almost completely rotate their heads.

Birding Spain a great idea for a birding break