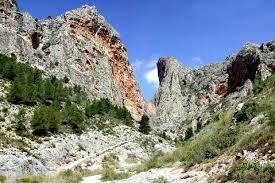 Sierra de Mariola, appointed as a nature reserve in 2002, is a mountain range in the province of Alicante. To get there it is about a one and a half hours drive from Refugio Marnes. The area covers 16,000 hectares with the highest peak in this mountain range the Montcabrer at 1390 metres.

Birding sites Alicante; Between the 16th and 20th century the people who lived in this area collected snow and stored it in ice cellars. The compressed snow turned into ice and this was kept until summer and was sold in the area to preserve food. These ice cellars are still prominent buildings in these parts. Also, the reserve has many natural springs and this is the reason why for centuries people have been established here.

The abundance of water has also ensured the Sierra de Mariola has a wealth of flora and fauna, with around 1400 species of plants. Mammals that live in the reserve  include genets, wild boars, martens, foxes, badgers, and wild cats. Birds that can be observed in the different habitats of the reserve include green woodpeckers, black tits, crested tits, goldfinches, crossbills, woodlarks, hen harriers, tawny owls, serins, golden eagles, peregrine falcons, goshawks, Eurasian eagle-owls and barn owls.

Birding sites Alicante; The griffon vulture deserves special attention with a reintroduction program (Proyecte Canyet) started for this species in 2000. Griffon vultures have been absent in this area for over a century and at the start of this project 16 birds from different recovery centres in Spain were released over a two year period. In 2005 the first chick of the birds from the reintroduction program was born. Up to now there is a stable population of 80 birds in this area and the project can be considered a success. The vultures have colonised the cliffs around the Cint ravine so this is a great place to observe them.

In Sierra de Mariola you can take some beautiful hikes. An English-language link to the website of the Valencian government with trails in the area can be found here. Read
about more birding sites Alicante on our web page birding sites Spain