The third city of Spain, Valencia a relaxed and ´feel good´city! 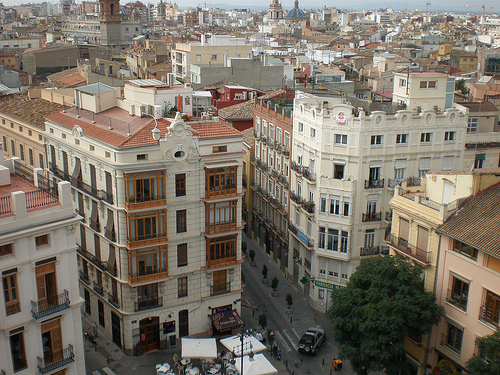 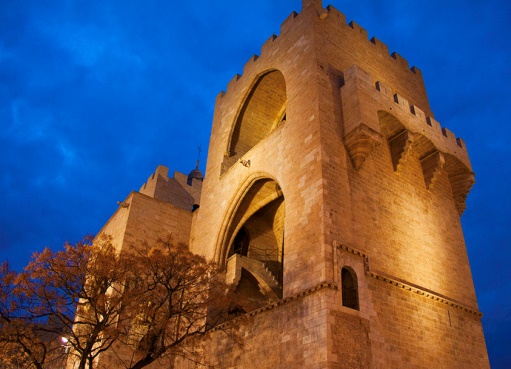 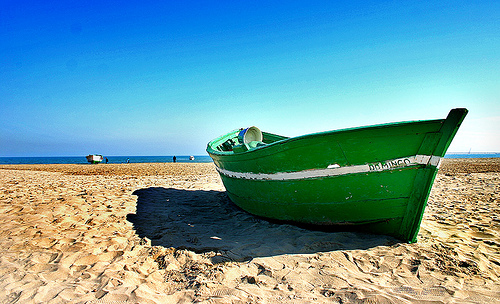 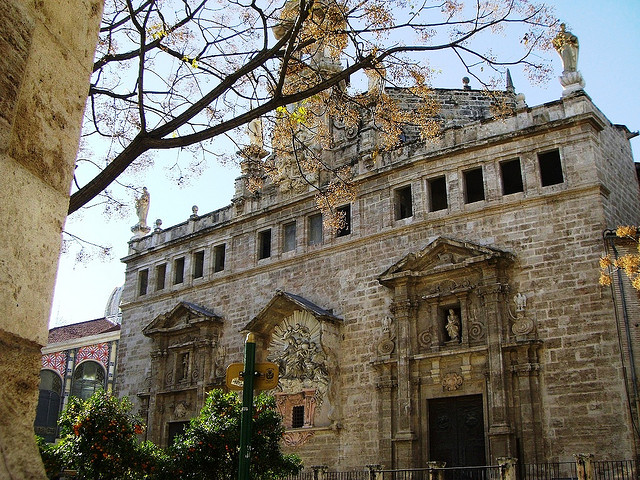 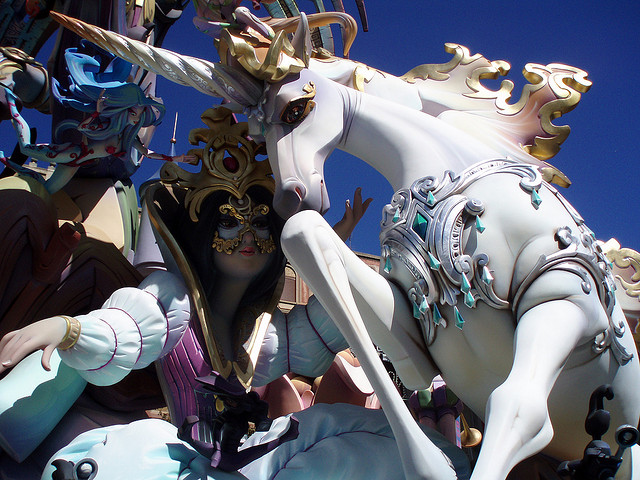 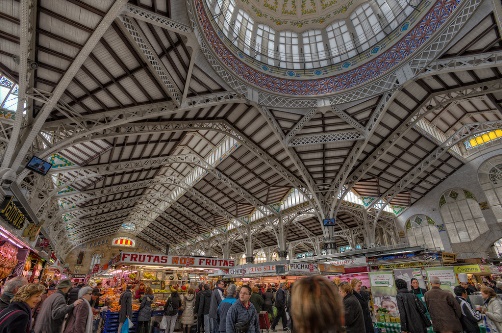 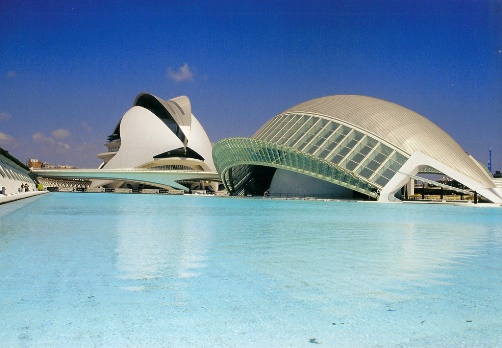 Cities Spain; he city of Valencia is the capital of the autonomous region (Comunidad Autónoma) and in terms of population, it is the third largest city in Spain, following Madrid and Barcelona, Seville is in fourth place. There live more than 800,000 people in the city but when the adjacent municipalities are included, this number  increases to more than one and a half million, making this metropolitan area the home of 16% of the total population of the Comunidad Valenciana. The population of Valencia is relatively young, 19% of the population is between 19 and 25 years old and 33% is between 30 and 49 years. The city is a 1.5 hours drive from Refugio Marnes and is a great daytrip from this great B&B and Eco-lodge in the Spanisch country side.

History of the city of Valencia 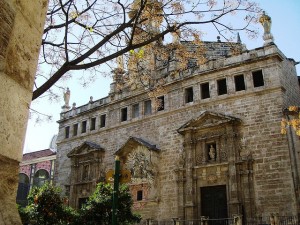 Cities Spain; The city of Valencia was established by the Romans in the year 138 BC, who gave the settlement it´s first name; Valentia. As  is the case with most of Spain, Valencia had a Moorish era and this lasted for five centuries, leaving a visible footprint up to this day. The conquest by Jaime I in 1238 brought an end to the Moorish period. Another interesting fact about Valencia is that the city has been the capital of Spain,  although it was only of very short duration; from November 6, 1936 to May 17, 1937. For more on the history of Valencia, look for example here.

What to see / what to do in this great city 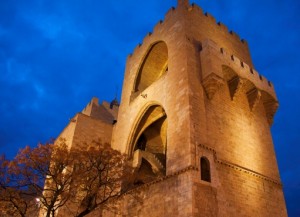 In Valencia there is a multitude of leisure options. For example, there are several cultural sights that can be visited; museums, the opera or visiting  one of the beautiful squares (Plaza de Ayuntamiento, Plaza de la Reina and Plaza de la Virgen to name a few). A visit to the impressive towers around the city (Torres de Serrano and on the other side of the city centre Quart Towers) is a must! In addition, there are all kinds of beaches around the city and can there can be very good shopping. Through this link (English) you will find more information about the possibilities offered by the city of Valencia. The following we want to highlight here.

Cities Spain; The recipes from Valencia which are best known, are the ‘arroces’, which can be translated into rice dishes. The most famous one is of course the paella Valenciana which is rice prepared in a special paella pan with chicken and rabbit, string beans, and garrofó (a type of white bean). Other rice dishes are arroz al horno “(rice from the oven),” arroz al banda “(with fish),” arroz negro “(with squid). Valencia and the surrounding regions are of course known for their oranges and other citrus fruits. The oranges are harvested in autumn and winter but are available throughout the year.

Cities Spain; This elongated park of 9 kilometers long which encircles the city centre is characteristic of the city of Valencia. The river Turia formerly ran thorugh this riverbed, but after the city experienced problems with flooding it was decided to redirect the river´s flow. Today the park forms the green heart of the city. In the park there are several sports facilities, for example the following sports can be practised; athletics, baseball, football and rugby. The park is home to several public fitness spots, there is a bike path along the entire length of the park and there are several children’s playgrounds. It is a popular place for outdoor recreation for Valencians. 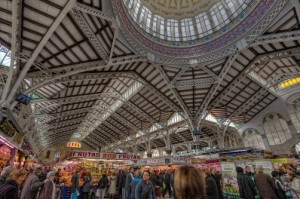 Cities Spain; Like many Spanish towns Valencia has its own Mercado Central (Central Mercat in Valenciano) as well. This market hall was designed in 1914 and it is a must when visiting the city. The market hall offers nearly 300 stands to vendors selling all kinds of amazing fresh foods (meat, fish, vegetables, etc.) The market can be found here.

Ruzafa (Russafa in Valencian) is a neighbourhood in Valencia which is currently very popular. The name Ruzafa stems from the Moorish era meaning “the residence of a head of state.” Especially in summers there is a lot of activity in the street in this district. And there are many special bars and restaurants located in this neighbourhood, via this link (Spanish) you can get inspirated when looking for a place to eat out. A visit to this area should not be missed when visiting Valencia. Here the district is located.

This district is located in the heart of the old town. This is the most beautiful part when it comes to old buildings and squares. Here a large part of the Valencian nightlife takes place (restaurants, bars and clubs) as well. It is also an area where many students live and the neighbourhood is ideal to stroll from one square to another through narrow streets and to be surprised around every corner. Here the district is found.

The City of Arts and Sciences 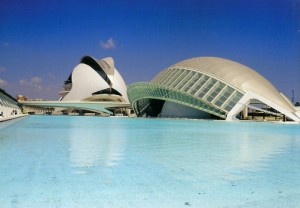 Cities Spain: These  architecturally stunning buildings can be found at the end of the Turia park on the side of the Mediterranean. It is a cultural and leisure centre and most of the buildings were designed by the Valencian architect Santiago Calatrava. The roofs of the Oceanogràfic were designed by Félix Candela (Spanish / Mexican architect), and  on this website (in English) of the Valencian government more information can be found about this special place.

Cities Spain; Las Fallas (Falles in Valencian) is the festival which gives the city of Valencia worldwide fame. Amazing parades, fireworks, huge bonfires, music performances, DJs, paellas on the street, this and much more is happening in this festive period. In the month of March Valencia is preparing for the coming spring with its Fallas. The word ‘Falla’ comes from Latin and is derived from the word “torch”. Through the ceremony of the Fallas the bad is figuratively burned and the good is reborn from its ashes. There are several theories on the origins of this festival. One of them explains that the current Fallas date back to the era in which carpenters would burn waste wood on public streets and squares in front of their workplaces on the eve of their patron saint, San Jose. The torches (made from wood) which provided illumination for their workshops in wintertime after the setting of the sun ,  were no longer needed  with the arrival of spring and thereby the lengthening of the days, so these were burned as a consequence. Some official, scheduled activities during the Fallas are the following: 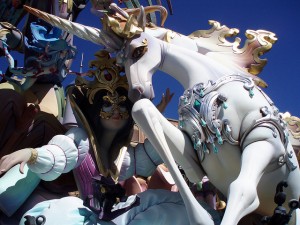 La Cridà Las Fallas starts the last Sunday of the month of February at the ‘Torres de Serrano´, here the inauguration party ´ La Cridà´ is held. The Mayor of Valencia hands the keys of the city to the Fallera Mayor (a kind of carnival princess who is elected each year) during this ceremony.

L’Exposicio del Ninot In the museo fallero Valencia approximately 800 designs of all Fallas associations are exhibited here, a jury choses the most beautiful design and this ‘Ninot’ is saved from the fire in La Cremà. The museum can be found here.

L’Ofrena This is an offering to the Virgin in which each Fallera (female member of a Fallas association) sticks a flower into a huge arrangement of flowers, building a huge mantle of mosaic of about 14 meters high. This takes place at the Plaza de la Virgen.

La Despertà This ritual takes place from 16 to 19 March at 08:00 o´oclock each morning. Falleros (members of one of the many Fallas associations) take to  the streets in parades, and set off firecrackers to wake up their neighbourhood to make sure that everyone is involved in the activities from the beginning. This ritual is hated by other Valencians, because for them only March the 19th is a day off.

La Mascletà Every day from 1 March to 19 March, this spectacle takes place at 2:00 pm on the Plaza de Ayuntamiento de Valencia. It is a composed of  firework displays with a very stimulating rhythm, a true ‘must see’ when visiting Valencia during the period of the Fallas! La Cremà The festival ends on March 19, after all Ninots, apart from the winning design,  are burned.

Enjoy  visiting the beautiful city of Valencia the third city of Spain!